Serverless Architecture is pretty young and fresh technology, so now people only share their experience and their approaches among each other because there are still so many things which are not defined because nobody knows how to deal with them correctly at the current point in time. In that perspective,

Serverless Architecture is pretty young and fresh technology, so now people only share their experience and their approaches among each other because there are still so many things which are not defined because nobody knows how to deal with them correctly at the current point in time. In that perspective, our 2 senior developers visited a community-led conference focused on sharing experiences building applications using serverless architectures. Here are some interesting insights from them.

What is serverless architecture?

This story began with the guy called Martin Fowler who suggested the first definition of this concept:

"Serverless architectures refer to applications that significantly depend on third-party services (knows as Backend as a Service or "BaaS") or on custom code that's run in ephemeral containers (Function as a Service or "FaaS"). By using these ideas, and by moving much behavior to the front end, such architectures remove the need for the traditional 'always on' server system sitting behind an application. Depending on the circumstances, such systems can significantly reduce operational cost and complexity at a cost of vendor dependencies and (at the moment) immaturity of supporting services."

After that, Amazon introduced Lambda functions in 2014 which became a symbolic start of the serverless boom.

What was the name of the conference?

The conference was called Serverlessconf NYC'17.

When and where did the conference take place?

The conference took place on the 10-11 of October 2017 at the New World Stages, Hell's Kitchen, NY. The conference is semi-annual approximately and is being organized in different parts of the world - New York, Tokio, Austin, London.

Who were the participants of the conference?

Attendees of the conference were Product Owners and Senior Developers who use Serverless technologies. These people are experienced enough to offer various instruments in this area due to the ongoing using of this entire approach for building serverless architectures.

How many people did attend the conference?

This conference is a very niche event because the technology itself is not that popular like other ones, so only 490 people including personnel were present there. The interesting fact is that more than 90% of visitors were aged from 30-45. It means that the whole serverless approach in software development is absolutely new and only highly professional mature people can deal with it for now. We were the youngest and even Peters Barski (organizer of the conference) was surprised how young were we and came to us of a friendly discussion after the main part.

What was the participation fee?

Which topics were discussed at the conference?

Who were the speakers at the conference?

There were a few categories of speakers:

What is Cloud Guru?

Cloud Guru are the founders of Serverless community who started from video training in preparation for the certification tests from Amazon. They created videos which can help to become certified AWS developer or certified AWS Solutions Architect. Also, they were giving some tips on how to build a quick and simple mobile app.

What's special about this company is that they managed to transfer their core product to 100% serverless architecture. So, they can be called Pioneers in the serverless area. 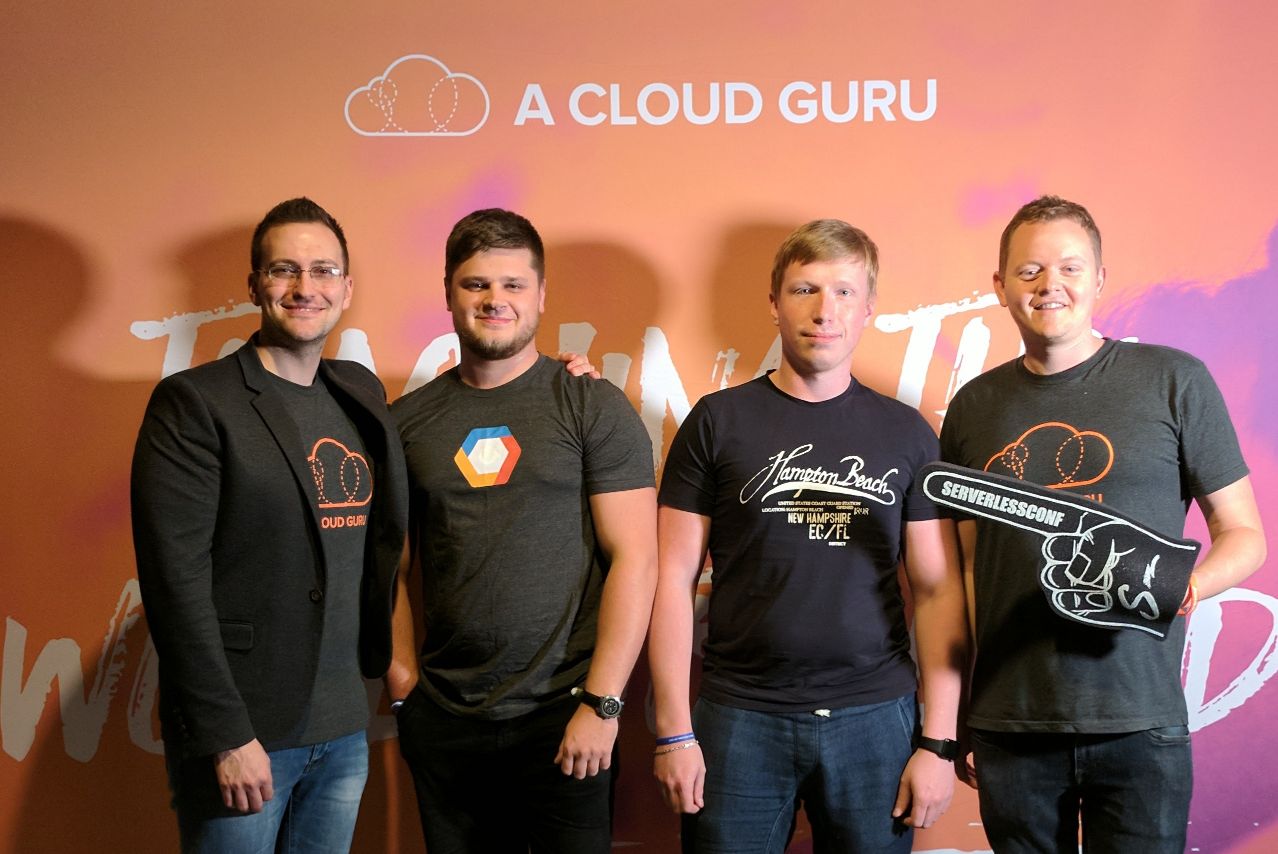 What were the main benefits for you as developers?

We became ensure one more time that serverless technology is very young. However, we can observe an increasing demand and interest to it from such technology giants as Google, Microsoft, and IBM. We also realized that our project Elements which partly uses serverless architecture is on the right way and we use all up-to-date methods there.

One of the main conclusion is that we do not fall behind that world of serverless concept and we keep pace with the most advanced and updated techniques within these practices. Our knowledge gathered from the existing projects completely well corresponds to the global level established by big western companies.

Did you get any kind of ideas during the conference?

From what we've seen there, we got an idea to build our own instrument for monitoring of serverless applications. We already have some new ideas how to create one and how to use it in our ongoing projects. We are actively working on this now.

What did impress you the most?

Industry professionals say that there is going to be a war between big providers and between smaller providers. They predict that there will be more and more serverless features. Also, there is an assumption that in a few years, the market will shape itself and some players will disappear because of competition and so on. Remaining ones will agree on some standards, and make cross-platform transferring easier. Now it is vendor lock, meaning that if your product is built completely on AWS, and AWS disappears in a certain moment, then your product will not work anymore. There should be some ways to move from one to another in the nearest future.

Firebase is a Backend-as-a-Service — BaaS — that s

New technologies bring us lots of tools for optimi