Firebase is a Backend-as-a-Service — BaaS — that started as a YC11 startup and grew up into a next-generation app-development platform on Google Cloud Platform. This technology allows you to make web applications with no server-side programming so that development turns out to be quicker and easier. That's why our 2 guys

Firebase is a Backend-as-a-Service — BaaS — that started as a YC11 startup and grew up into a next-generation app-development platform on Google Cloud Platform. This technology allows you to make web applications with no server-side programming so that development turns out to be quicker and easier. That's why our 2 guys visited a conference contributed to the Firebase itself, its future development and innovations.

What was the name of the conference?

When and where did the conference take place?

This is an annual conference. This time, the conference took place on the 31 of October in Amsterdam, the Netherlands. Dev Summit was organized in the amazing concert hall named Muziekgebouw aan ‘t IJ. It was a one-day conference.

Who were the participants on the conference?

During the conference, there were a few types of visitors:

How many people did attend the conference?

More than 1000 people attended this conference. This number is growing every time because Google puts so many efforts in order to promote and develop Firebase itself. We can definitely name it as one of the most successful acquisitions of Google.

What was the participation fee?

There was no participation fee, but in order to get into the conference, you should have applied before. Moreover, there was a detailed selection process, meaning that only highly experienced Team Leads, CTOs, and Senior Developers had a chance to visit this conference.

Who were the speakers at the conference?

What was special about this conference?

The special thing is that the entire Firebase development team came to the conference including Product Managers from Firebase and all other responsible people for the platform. There were a great many of certain areas with a possibility to ask some questions directly to developers from Google. There were not only different talks and speeches during the conference but also some workshops called Code Labs, where everyone had a possibility to sit together with Google Developers and build some small projects using Firebase technology. Our CTO participated in a workshop connected to the development of applications with Firestore - a new database from Firebase. Moreover, our Android Lead participated in a Code Lab called “Supercharge your app with machine learning” where they managed to deploy a few cloud functions in 30 minutes and connect them to the Google Vision API. So, it allowed to scan pictures and understand whether it contains any offensive content. Also, our Android Lead visited one Code Lab about Hybrid Solutions where he got some updates about Firebase - Flatter concept for building hybrid applications. 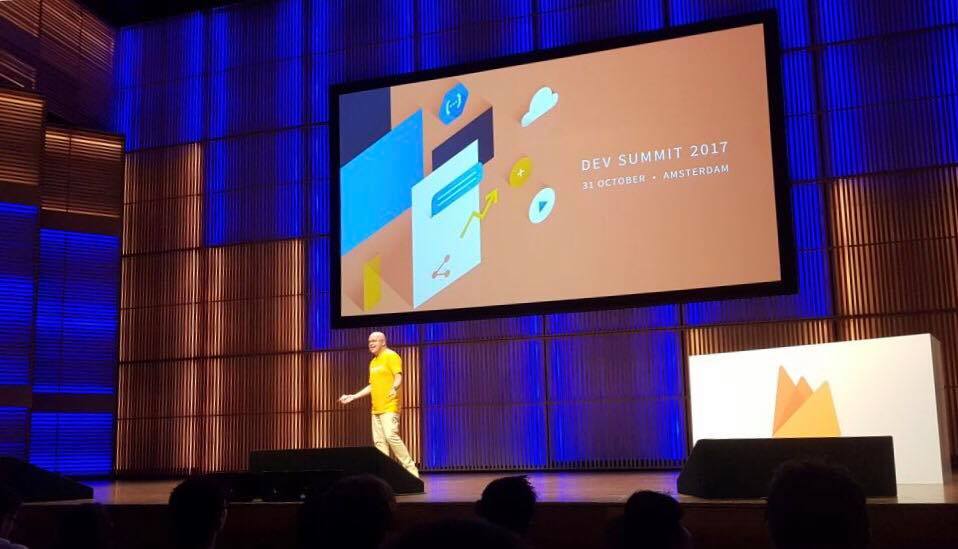 Which topics were discussed at the conference?

What were the main benefits for you?

"The first thing was to understand what Firebase has developed in the sphere of serverless applications. For example, a new Database called Firebase Cloud Firestore which is quite similar to the MongoDB but gives you a possibility to subscribe to real-time events from it. So, as we used to build just partly serverless applications, now with a database solution like Cloud Firestore, we are going to try building the entire backend for the application in the serverless architecture. In this case, all servers will be run on the cloud functions applying Firestore database.

The second thing was to understand the roadmap of Firebase in terms of their cloud functions. We had an opportunity to talk with developers from the specific team, and we became sure that Function as a Service (FaaS) is a top priority for the future development of Google Cloud Platform. They are going to add more programming languages because now it’s possible only on Node.js. They are going to integrate cloud functions with other services in Google Cloud as well. Also, Google will proceed with a continuous improvement of the existing features.

For me, Firebase was considered as a platform for some backend development of mobile applications plus a solution for real-time notifications, but now I understand that Firebase allows building an entire backend for even huge applications using Cloud Functions."

We were among the pioneers in the Ukrainian market who started intensively use Firebase and we still are. So during the conference, we had a chance to have a close communication with European companies which use Firebase. We could share some thoughts and problems, discuss some controversial and uncertain moments and ask questions to people who are already well-experienced in Firebase. Also, Google developers answered all the upcoming questions and shared their contact information for future communication.

We use Firebase for a long period of time and now we look for new ways of Firebase implementation in order to reduce the development time for mobile and web applications, so the product solution can be more time- and cost-efficient.

New technologies bring us lots of tools for optimi